We had a blast!

The class on sandblasting lampwork beads was - well - ok shoot me - it was a BLAST! We had so much fun!

This past weekend, we hosted Jeri Warhaftig and her husband Neil to come and install new sandblasting equipment in the lampworking studio. So much awesome! We now have a fully functional, professional grade sandblasting unit for glass, appropriate for doing beads and larger glass pieces - up to the size of plates and glasses and vases even. It's pretty roomy! 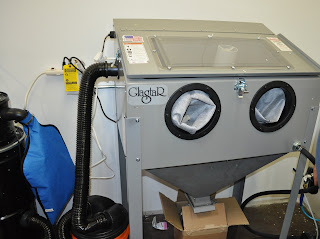 We'll be writing up a procedure guideline and making it available for folks to come in and rent time on it. It might seem pretty intimidating at first, but once you get a taste of it, you're going to be sandblasting everything in sight!

I don't normally expect to get something I can show off from a class - which is not to say that I don't usually show stuff off - but it's usually with some sort of caveat - but this bead, from this weekend - I think this needs no justification at all! 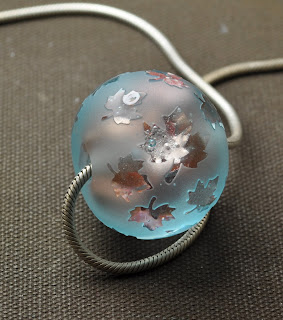 Posted by dragonjools at 8:06 AM