We've taught you simple loops, and wrapped loops. And now, we're going to show you ... Rapid Loops. Or, you too can make 14 wrapped loops in 6 mins.

There are some applications where lots of beads hanging together just look fabulous - but making those dangles and loops can be tedious.

First - let me back up a little.

Last week, we had our pre-Christmas staff dinner. All the crazy bead ladies in one room! With Chocolate, and Lychee Martinis.

We just want to say to you - anything can be an earring.

Making your own ornament-inspired, but slightly more wearable earrings is a snap. Yep - you can't turn your head wearing those. You'd hurt yourself.

I actually came up with this method of "quick and dirty" wrapped loops - Rapid Loops - as an act of desperation, when I realized I had committed to making about 250 wrapped loops in a couple of hours. I thought - "you know - the wrap doesn't have to be perfect if it's not going to be seen ... ."

But you know what? - for all of that - the wraps and loops actually come out pretty even - warp speed wrapping notwithstanding.

The basic idea is to pre-load all the headpins (don't bend them, leave them straight), then pick them up and hold them slightly above the top bead. Use Round nose pliers or the small bail making pliers for this.

So here's the video. Now, the person in the video is starting from scratch - she has never made loops this way before. Notice how she picks up speed and gets more comfortable as she goes?

Sometimes you find yourself getting the wire wrapped around the pliers - if this keeps happening, change the angle that you are grabbing the headpin at the tip to have the pliers and the headpin form more of a straight line.

And - here's the finished loops. Actually not that bad, eh? I've seen worse published in magazines as being done by professionals! 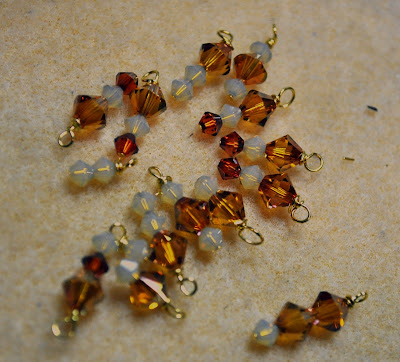 To make your own Ornamental earrings: 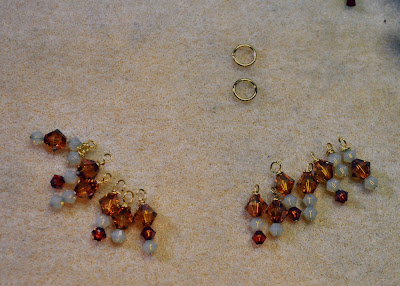 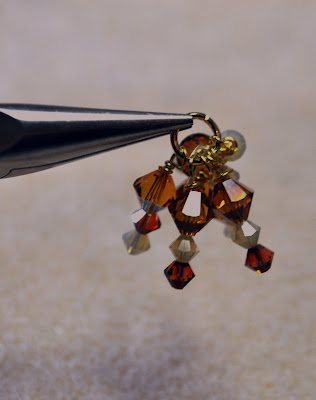 Then just hang on an earwire. 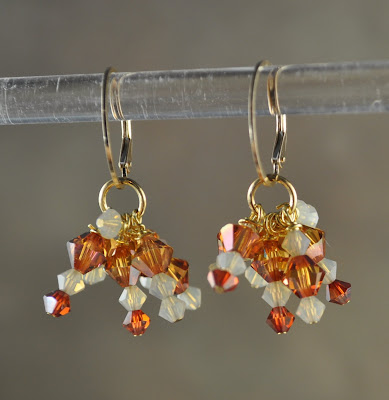 (These "interchangeable/re-usable" 14 Kt gold filled earwires will be live on the site on Wed at midnight.)


Want to go bigger? More like the original ornament? String 15 dangles on a piece of softflex, ... 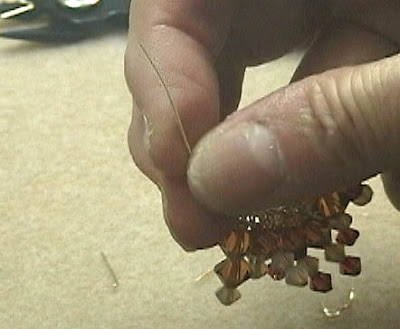 Then knot the Softflex (or beading cable) back on itself, pulling the dangles up into a ball. 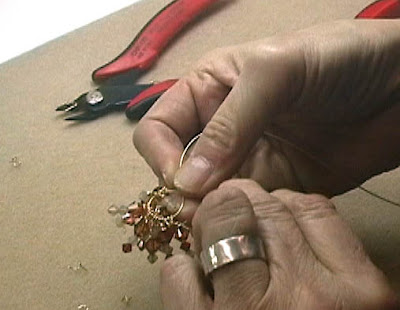 Make a loop in the end of the cable, use a crimp to secure, and hang as earrings. 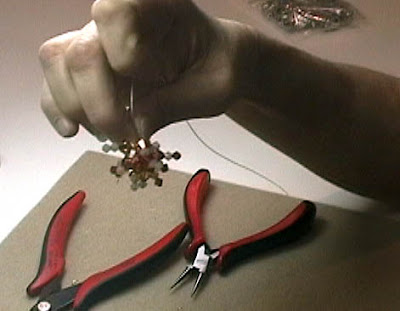 There you have it. Go forth and make Rapid Loops! Hang dangles off of everything!
Posted by dragonjools at 8:43 AM

Email ThisBlogThis!Share to TwitterShare to FacebookShare to Pinterest
Labels: tips

Amazing! As they say, necessity is the mother of invention and this is fabulous.

Great technique! I have always been frustrated with my own attempts at making wrapped loops but this way looks a lot easier. I will go and practice now!

Where is the video, please?

Problem with the video is sorted out. It is caused by you having an out-of-date flash player, which you can get here:
https://get.adobe.com/flashplayer/
(remember to unselect the Optional Offer - unless you actually want it. But it's easy to miss.)

I had to try quite a few browsers and computers before I figured this out. Usually - the error message tells you want is wrong, but in this case - it was just a big blank space.