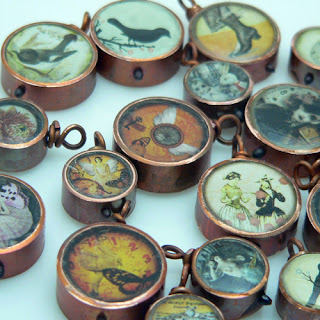 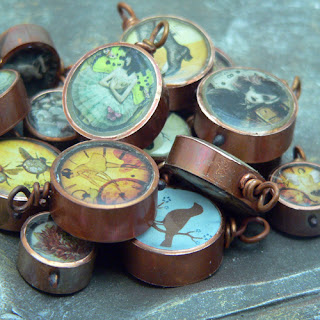 A while back I picked up a book by Stephanie Lee called Semi-precious salvage. I just love her designs, as I'm quite enamored with the vintage-y, rough, dug out of the dirt look. Mixed media jewellery is quite intriguing to me - and I plan to explore it more over the next little while. I'm really just scratching the surface.

In Stephanie Lee's book, she used copper pipes and copper sheet to create bezels, she further roughens up the look by covering the whole thing in solder. I was excited to see if I could take the little resin/glass pendants that are so popular, and kick it up a notch.  Of course, having an open back allows you to create a double sided pendant!  The process is crazy time consuming, but as I've discovered - If you make a whole bunch at a time, it's not so bad :-)

First step is to cut the tubing into little slices - for this, you'll need a tube cutter from the hardware store. You could use a jewelers saw, but that would take even longer!

I then used our handy hole punch pliers to create 2 holes on opposite sides.  A handmade balled copper headpin was inserted, and wired up into a wrapped loop. 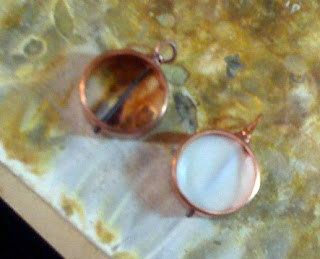 To create a flat surface to stick my paper on, I used some transparent polymer clay, and then baked it in place. I suppose you don't really need to bake it, since you're encasing the whole thing in resin - but I did, as I felt I should for some reason...

Once my images were in place, I then filled each side with resin, letting each side dry for 2 days before filling the other side.

Once the pendants were fully cured, I used some renaissance wax to seal the copper to help prevent tarnishing.
Posted by jen at 1:39 PM

These are gorgeous! Very clever!

What a fabulous idea... so many other possibilities for filling them with polymer clay designs, as well. Can you give details please on what the resin is and the sealing wax for the copper pipe?
Thanks so much. Gail

Very Steam-punky! Wait till you see the teeny gears and watch parts that I just got. They will be perfect for those pendants.

Gail, I'll edit the post a bit later to give more details on the materials used.
The resin is Ice Resin which we carry at beadFX - and I also used renaissance wax to seal the copper.

These are stunning - I love the idea so much!

I really do like these and your instructions are good.

What a great idea! I just hopped over from pinterest to see your tutorial for myself. Thanks for the inspiration! t.xoox

If you didn't bake the translucent, it would have leeched into your paper, giving it a spotty, oily appearance. Your copper pendants are gorgeous!

I just LOVE this Idea!! I have copper pipe just waiting for this inspiration...I am big into Polymer Clay, I have just discovered my new found love for Polymer in the past few months and this is going to open all sorts of visits from my muse!!! I am a mixed media jewelry designer and I have all sorts of fun going through my mind right nowthank you so much for sharing :D-

What is renaissance wax?

Renaissance Wax is a very fine, high quality wax developed by museums for preservation work.
--
Renaissance Wax Polish was originally formulated in the British Museum research laboratories in the early 50's as a response to a need by museum technicians and restorers for a wax polish that did not contain acids and would not yellow with time, would not cause future conservation problems, and would not detract from the intrinsic value of the items being preserved. Renaissance wax has a micro-crystalline structure - much finer than regular waxes. It is highly efficient at moisture resistance, excellent for protection against weather and corrosion. Apply thin and rub to a lustre and it is glass-clear. You can even use it to protect photos, and it does not stain - not even white paper. Accumulated dust or dirt on top of the wax can be washed off with warm water and a little soap. It can be removed with White Spirit, if required. Comes with an information sheet.

I think these are awsome, I think im going to try and make some for my wife and daughter...

If anyone is making these, we are a shop that wants to buy some! Please email us at found@tinbarnmarket.com

Love what you did. I take Stephanies classes to. I couldn't find the punch that you use, I probably would have drilled it, but I'd rather punch it. Did you take Pipe Dreams?

We must be temporarily out of those particular ones. Similar pliers can be found here: http://www.beadfx.com/catalogue/toolshand.php#s32143

I would love to take one of her classes -, but haven't yet had the opportunity. I do have her book though.

Love these! So pretty!

This is lovely - and as you put a bar right through anyway, why don't you put something in there that can flip round? So you can choose which side you want facing forward each day... or something...

I was inspired to make these myself, and they have turned out pretty well, but are very time consuming! I have had the problem of the resin leaking through when I fill the first side. Any tips?

There must be a small area of the polymer that did not seal to the side of the pendant. Try putting a bit of glue around the edge of the pipe on the inside. Hopefully, that will seal up any possible leaks.

Excellent blog !!Thank you very much to share with us,such a wonderful information you provide in your blog articles.

fantastic blog.. many thanks for all the inspiration!

Very cool thanks for the tutorial..can not wait to make some. Off to find the pipe cutter in my hubby's tool box.

Super Fun and cute. Can't wait to try this!

I dont understand how/what the polymer clay is used for

The polymer clay was used to fill the inside of the pipe. I needed a flat surface to adhere my paper to.

your work is great. I too work with odd copper items and just love how they come out. enjoy your art.

Exactly what I have been searching for! I make 1" pin back and flat back buttons and am trying to incorporate them into jewellery pieces in a really unique way. You can purchase pre made bezels, but thats not the look I want. My question is after the pipe is cut what do you do to round or finish the edges so they aren't sharp or straight? Is that the wax you use? It looks amazing!

I use a set of files to file down the edges as necessary. For a final smoothing, rub the disk in a circular motion of some emery paper. I don't recall the size files I used, but the final emery paper was probably around 200 or 300 grit. The resin came up over the sharp edge, which allowed me a little slack in the smoothing stage.

Where did you get the awesome pictures to encase?

I found the images as collage sheet downloads on etsy. There are tons!

I love these. I noticed that you used an assortment of sizes but could you let me know what size thickness are most of the copper cut to and what is the circumference of the area where the photo would go.
I looked but didn't see it posted. Would they take a 20mm glass cab over the photo?
Very clever idea

I wish I could answer your question! I made these so long ago, and no longer have any finished pieces or copper pipe left to measure.

Good morning,
Love these!!! Would you please post another link to the punch you used? The link takes you to a page with many tools but none seem to be the one you used. Thank you so much.
~Renée

Love these!! They are so cool. Thank you for sharing. Would you please post another link to the punch you used? The link takes you to a page with many tools but none seem to be the one you used. Thank you so much.
~Renée

Thanks for pointing that out - fixed the link - we moved the pliers to a page for riveting and cold connections!

Hi. These look wonderful,do you offer classes on these? Thanks so much :)

LOL Plaaaaleaazzzee let me know!Will have to get to your store soon.

Hello, I know this is an old blog, but maybe you'll still see this. When you said you used some transparent polymer clay, and then baked it in place. I'm new at this. Did you put your picture in the clay and then bake the whole thing?
Thank you,
Karen
spellbinder59@hotmail.com

No, I added the picture after it was baked. I baked the polymer clay to provide a firm surface that I could both attach the picture, and apply the resin. Hope this helps!

OH NO! As soon as I saw these babys the little gears was the 1st thing I thought of! These would also look very cool if one was to hammer each side then do an "over ~ enamel on it...you know, kind of burn it around the edges... Great job! And thanks for the inspiration!

I shall contact you once I've given it a shot! I'm extremely excited! Hoe many were you thinking? Pls contact me @
UrbanMuse2@gmail.com I'm Teri, I own the business and do all of the designing as well as all of the work.
Hope to hers from you!🤗

Super cool. A friend had given me a pipe cutter awhile ago and after seeing these yesterday I whipped them out and looked around for stray pipe. Found some from a broken wind chime and went to work. Easy peasy to cut! I drilled the hole top and bottom and put a wire all the way through then threaded some beads, actually I also drilled a hole in a small toy chicken then threaded that through. I put duct tape to stock the resin leak but I may switch to your super suggestion of clay! I did find a trick of using silly putting to stop leaks that works pretty well.
Thanks a ton for the inspiration!
Susan
happysue.com