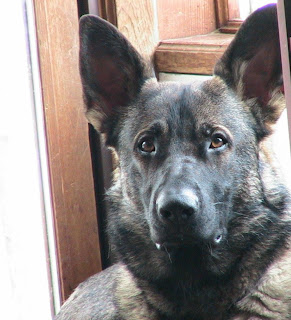 Not that this really has anything to do with beads, but I was taking my two dogs for a walk (to the mail box, to mail a bead, so it is sort of related) - and it was early - with the kids on their way to school.

I have two German Shepherds (German Shedders, as I like to call them) - but, let me hasten to add, they are not "Show" dogs - they are from German working dog lines and they bear little resemblance to the typical North American show dog. (here's a pic of one of them.)

So, there's a small band of kids running towards me on the sidewalk, which is just plain dumb, but that's another story. I shorten up the leashes and step off the sidewalk so they can rush past, and I hear one of them say, as they run up, "Look - Wolves!"

As they ran by - a girl in the group hisses "They're NOT wolves" in a tone of utter contempt for her peer.

But I was oddly flattered to be mistaken for walking a pair of wolves on leash in suburban Toronto. Think I'll go take the "wolves" out for a walk again this a.m. ;-) Look, wolves!
Posted by dragonjools at 7:16 AM

Email ThisBlogThis!Share to TwitterShare to FacebookShare to Pinterest
Labels: wolves