A Life is Not Long Enough to Say Everything about Beads

Last night, our Buyer and I attended the 2nd Annual Jablonex Fashion show here in Toronto. This was hosted by John Bead - Canada's largest wholesaler and importer of beads. This was a real fashion show, with a runway and tall, skinny models and music and the whole nine yards! There was kind of a fantasy feeling to the evening - if you squinted, you could almost pretend that you had just wrapped shooting a movie with (insert hunky actor of your choice here) and you were taking in a fashion show before jetting off to your private island. The beautiful people where all there, well - actually - a great many friends wearing beautiful jewelry - which, in the long, is better - and there was a general feeling of expectation. 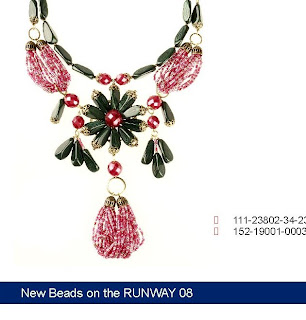 The show opened with a display of First Nations' dance - performed by Greg Dreaver - with an elaborate beaded costume that is lovely embellished with thousands of tiny Jablonex seedbeads - just as they have been traditionally used by First Nations' peoples for over 300 years now. Czech beads have been made and traded for a long time!

Then we were treated to a speech by the Head of Sales for Jablonex. Jablonex is the premier maker of firepolish, pressed glass, and seedbeads in the Czech Republic, and, as he put it - virtually "the last people standing" in the European manufacture of firepolish, pressed glass, and seedbeads. Bead production these days is largely being moved to India, and China. The harsh reality is that while paying someone mere dollars a day to make beads may seem economically sound, apparently - paying them pennies a day makes for an even better profit margin. This gentleman is as enthusiastic about beads as any of our crazed bead ladies - and promised to speak from notes so that he finished before midnight.

He was very enthusiastic about some new beads that are coming, and showed us some videos of how the beads are made. He shared some interesting tidbits of information - for instance - the spoilage rate in making the farfalle beads - tiny little butterfly shaped beads, is 80%. For every 100 kilos of glass they start with, they get only 20 kilos of finished beads. He told us about their environmental practices - how they have one factory where a river flows in one side of the facility for use in the glass making process, and flows out the other side, cleaner than it goes in. You could tell that he just wanted to talk about beads forever, and he told us "A life is not long enough to say everything about beads."

Then, the show began. The show's theme was "The Four Seasons" and we started with Spring. The outfits were very fashion show - some were crazy impractical - just like all those pictures you see in magazines, some looked like you might actually be able to wear them. The jewelry was over the top - nothing subtle here, and with the music and the movement of the models and the outfits - it was very difficult to sometimes remember to look at the jewelry, much less really concentrate on it. We saw some new shapes of beads, and some new effects and finishes, and got some ideas for some interesting ways to put beads together - see some of the jewelry here! The show moved on through the seasons - summer over too soon, and fall and winter coming rapidly behind. A big finale finish, and then a wine and cheese reception!

Saw many old friends there - other beaders and designers and bead store owners. Schmoozed a little with Softflex - and got a couple of design ideas too. It was a party atmosphere and everything went off very smoothly. The store was decorated and everything ran smoothly - at least to our eyes - from start to finish. You would think that the staff at John Bead has been running and organizing fashion shows professionally for years.

Kudos to the staff at John Bead for putting this together and to Jablonex for bringing it to us - we really hope that they will do it again next year - and cement a new tradition. After all, Jablonex is, we were told, about traditions - the tradition of quality and excellence and the fascinating, varied world of beads.
Posted by dragonjools at 7:53 AM