I saw a video on Artist's Concrete, and then another video - and then another and someone asked about it and it looked really cool and I could see a lot of potential, and here we are - we are now carrying it in the store!

So I had a chance to sit down with it and do a little experimenting before it goes live on the website (tonight at midnight!).

It also goes from too dry to quite wet and sloppy with a bit of a shine not in a gradual progression, but suddenly - so really do stick to adding just a few drops as a time after the initial add. Add the amount they recommend, and then add just a drop or two at a time.

These photos are shot with my phone - so they aren't the best - but they give you the idea. 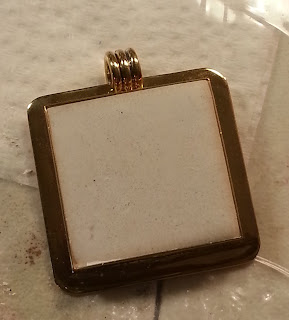 First up - I mixed up some concrete and spooned it into a bezel. I used a bamboo skewer to jiggle it into the corners, and let it cure unadorned. It has a nice stark look to it - and one of the jewelry magazines (do you think I can find it again? Nooooo!) did an article about colouring concrete with pencil crayons a while back. (They say to seal after with Renaissance Wax).

With the left overs - I made a blobby cabochon just on the plastic on the table to see what that was like. That worked surprisingly ok too (but I can't show you because I've done other experiments with it since then). I later tried breaking that blobbly cabochon - and I could break it in my hands - so when this concrete is fairly thin - it's not as strong as a metal say. It did take some effort to break. It's stronger than, say - a cookie. This is a fragment of that blob - I tried colouring it with alcohol inks. The inks don't flow the way that they do on slick surfaces like ceramic tiles, for instance, and it was very dark, until I essentially rinsed it with the alcohol medium. The effect is quite interesting. 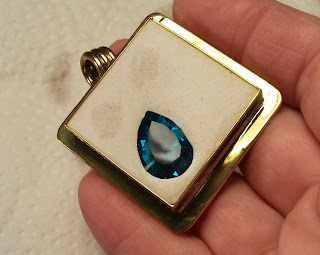 Next, I wanted to try embedding something in the concrete - I wanted to see if it would stick, sink in, or what. Using another of the square bezels, I embedded a rather nice Swarovski fancy stone. The effect is quite pleasing. I pushed the stone down a bit to make sure that the concrete flowed over the widest part of the stone to seal it into place. 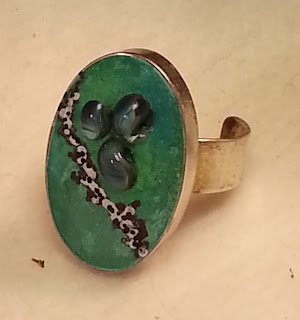 I then used a ring base for the next experiment. The ring has to be flat and stable while the concrete cures, so I cut a small, rectangular hole in a styrofoam meat tray, and turned it over, and stuck the ring in it, to keep it stable and level. I embedded 3 beads in it, and when it was cured, coloured it with alcohol inks, and added a little more variation on top with Oil-based Sharpies.(tm) 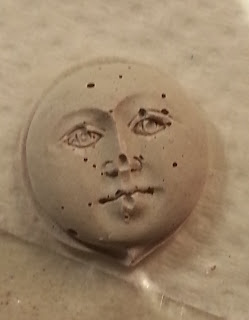 Then I decided to try casting it in molds. It casts well enough, and pops out of the mold ok, but you can see that I had quite the bubble issue. 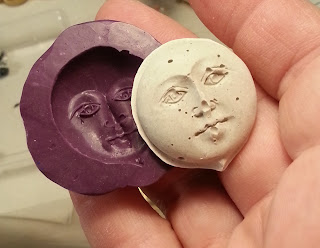 As you can see - it doesn't really shrink any significant amount. 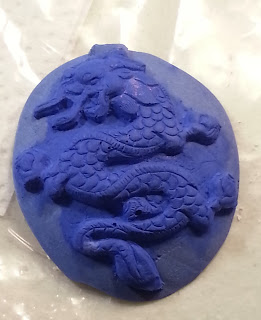 So then I tried casting, and using some of the blue concrete pigment. If you watched the video linked above, you can see that they got colours that are quite a bit lighter. Bearing that in mind - I used a lot more of the pigment than they recommend - probably about 3 times as much.

This dragon pendant mold is quite large, and the amount I mixed really only filled the raised pattern part of the mold. I quickly mixed up more concrete - just using the left overs to colour it, so that it was deliberately lighter in colour, and used that to fill the rest of the mold. You could use this idea deliberately to make some thing like a cameo - with the background in a different colour.

I was quite particular about working the air bubbles out of this - I jiggled it about, first with a bamboo skewer in the mix, and then by tapping the side of the mold as it cured. You can see that this was quite successful, with just one or two significant air bubbles. 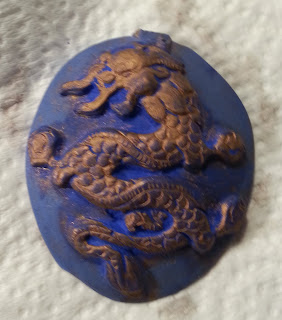 I later used the Gilders Paste to highlight the pattern. 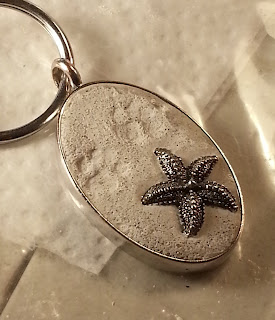 So finally I decided to try something a little more deliberate. I mixed up the mix, put it into a bezel, and cut the ring off a starfish charm that has been in my stash for ages, and embedded it in the concrete, and then pressed two paw-prints into the concrete to evoke a walk on the beach with your dog. The paw prints flattened out and I had to keep re-impressing them, so I would say that this is a case where you want to make the mix thicker. It wasn't until it was just about to cure that the marks really stayed put. I think a thicker mixture and maybe making the impression a little closer to the end of the working time would help.

I have been carrying this in my pocket for a week now as a key chain, and the starfish is still resolutely stuck, and the concrete itself has taken on a bit of colouration just from the inevitable dirt, fluff and bits of dried liver that it encounters in my pocket.

So that is my first look at the new Artist's Concrete. I'm still quite excited about it, and thinking about what I can do next with it!

I love the bubbles, and will be giving it a go, later in the week. Are you surprised?

Robert Dancik here and first off - thanks for posting such a thorough series of experiments with my concrete. I quite like your approach and willingness to "play" with the new material. There is way to much information I can give you here about using the material however, I am happy to exchange emails (mine is playcik@gmail.com) or better yet have a conversation on the phone/Skype/Facetime. I am also teaching several workshops using my concrete however they are in the US. However, if there is a venue in Canada that might be interested in hosting a workshop, I'd be happy to put one together and come up and show you the vast possibilities of the material.
Just to whet your appetite a bit I'll mention that you can cast the concrete in rubber stamps and it comes out beautifully!!!
Please let me know if you would like some images and I can get them right to you.
I look forward to hearing from you and until then, Play Well Robert